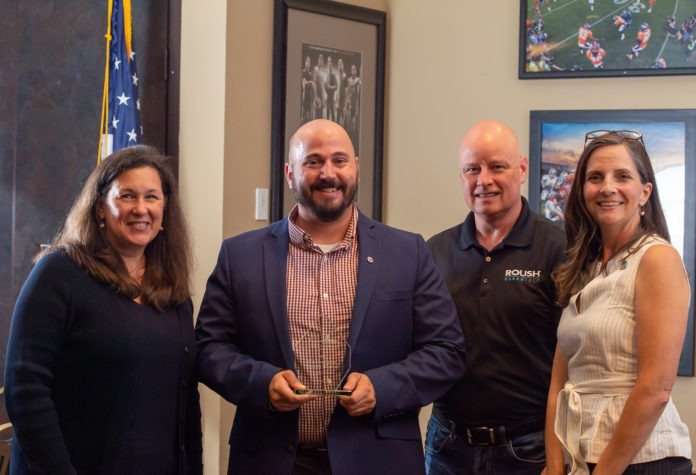 UPS received the Clean Fuel Champion Runner-Up award for the second-highest reduction of GHG emissions, with over 800 tons reduced. UPS operates biodiesel, propane and natural gas vehicles within LCF’s territory. According to the company’s sustainability report, its goals include sourcing 40% of ground fuel from “low-carbon or alternative fuels by 2025” and having 25% of its annual vehicle purchases be alternative fuel and advanced technology vehicles.

Southwestern Electric Power Co. (SWEPCO) was honored for its corporate leadership in recognition of efforts to support the development of an electric vehicle charging corridor along interstate highways. It has supported the Louisiana Clean Fuels DC Fast Charging Master Plan and the Louisiana Electric Vehicle Road Show and has launched efforts to rally community leaders and major utilities in the state to submit proposals for funding for chargers from the state’s Volkswagen Settlement plan.

“We’re proud to partner with Louisiana Clean Fuels and honored to receive the 2019 Corporate Leadership Award,” said Chelsea Adcock, consumer programs marketing coordinator for SWEPCO, who accepted the award on SWEPCO’s behalf (pictured below). “LCF has been a valuable resource as we determine the most effective and efficient way to bring electric vehicle infrastructure and, hopefully, Electric Vehicle Alternative Fuels Corridors, to northwest Louisiana and its residents.”

The Paretti Family of Dealerships was recognized with the Dealership of the Year award for its continued work in promoting electric vehicles and its active participation in LCF’s events throughout the year. The Paretti Family of Dealerships has been a prominent sponsor of LCF’s Louisiana Electric Vehicle Roadshow, and the company has shown its Jaguar I-PACE at several Road Show and National Drive Electric Week events.

Waste Management’s fleet was recognized as having the largest growth by volume of alternative fuel usage. It grew its natural gas usage by more than 300,000 GGEs in 2018. In addition, the Most Improved Fleet Award went to Eagle Distributing of Shreveport, La., for growing its alternative fuel usage in 2018 by 10 times over the previous year.

Louisiana Department of Environmental Quality (LDEQ) secretary Dr. Chuck Carr Brown was recognized for his leadership in public service, with special recognition of LDEQ’s diligent work on the Volkswagen Mitigation Settlement, as well as efforts with alternative fuel corridors. Vail presented the award to Brown (pictured above) at the reception.

“LDEQ supports the work Louisiana Clean Fuels does to promote the use of alternative fuels and zero emissions vehicles in our state,” Brown said. “We are all working toward a cleaner environment, and we have made great progress in Louisiana. LCF’s efforts have been key to achieving those gains.”

Other awards were also given out:

The following entities were also recognized for their efforts in reducing emissions and conserving fuel:

Check out more alternative news out of Louisiana here!