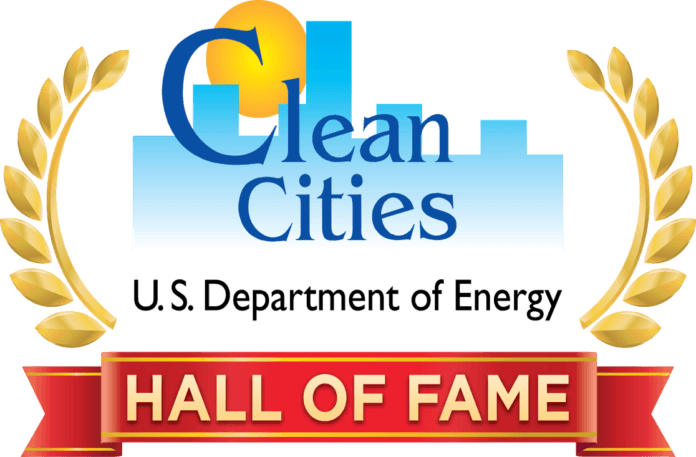 Under these coordinators’ leadership, in 2016 alone their coalitions had a cumulative energy use impact greater than 27 million gasoline gallon equivalents and averted over 116,000 tons of emissions through use of alternative fuels, advanced vehicles, fuel efficiency, and idle reduction measures. The energy impact reflects both reduced fuel use and increased fuel diversity. Reduced fuel use makes our transportation system more energy efficient, while increased diversity through domestic alternative fuels provides consumers and business more energy choices. These accomplishments have contributed to the national network of Clean Cities coalitions’ cumulative impact in energy use greater than 8.5 billion gasoline gallon equivalents since the first coalition was designated in 1993. As a result, coalition projects have also improved local air quality and contributed to cleaner transportation options throughout the nation.

The four new inductees are highlighted below:

Chuck has been actively involved with the New Jersey Clean Cities Coalition since 2009. Prior to leading the coalition, he amassed more than 30 years of professional experience as a program manager both with the Army Corps of Engineers and as a consultant. Much of his career has focused on supporting environmental and alternative fuel projects.

Feinberg developed a reputation for his keen technical skills and willingness to collaborate with others when he successfully managed an $18 million Recovery Act grant. Through the grant he put more than 300 compressed natural gas (CNG) vehicles—including refuse haulers and jitneys, or small buses—on the road, and oversaw the installation of six CNG stations across the state. More recently, he developed and administered a program to repower unregulated marine engines with less polluting, more fuel-efficient Environmental Protection Agency-certified Tier 2 & 3 engines. The new engines are expected to result in a 15%–16% improvement in fuel economy, and estimated diesel fuel savings of 4 to 5 million gallons during the lifetime of the engines.

Feinberg is a recognized champion of sustainability, alternative fuels, and environmental stewardship and has been honored with awards from NGV America and the U.S. Green Building Council, New Jersey Chapter.

As coordinator of the San Joaquin Valley Clean Cities coalition for nearly two decades, Linda Urata has established herself as a linchpin of the Clean Cities community by maintaining a culture of innovation and initiative, while celebrating other’s successes.

With cleaner air always an objective, Urata worked closely with the Kings Canyon Unified School District to introduce the first production model eTrans Electric School Bus in the nation. She was also instrumental in developing the Propel Biofuels station in Fresno; in introducing first responder and technician training; and bringing liquefied natural gas trucks and compressed natural gas and hybrid transit buses to her region. Most recently, Urata’s impressive successes include working to inform stakeholders about the Volkswagen Settlement plan for California, developing outreach efforts to include materials in Spanish, and including Fresno as a target city for alternative fuel expansion.

Ann Vail has been an innovative force behind many impactful projects during her nearly decade-long leadership of Louisiana Clean Fuels.

Known for her infectious enthusiasm and dogged motivation, Vail garnered the support of both the state and the Southeast Louisiana Clean Fuels Partnership shortly after assuming the role as coordinator, successfully expanding the coalition’s territory in Louisiana. In her time as coordinator, Vail has expertly guided Louisiana Clean Fuels’ stakeholder base through dramatic growth and increased their alternative fuel use from mere thousands in 2012 to upwards of 8 million gallons per year. She has also been a staunch advocate of ensuring the continued operation of a landfill gas operation in Louisiana.

Never one to shy away from a challenge, Vail is a forward thinker who readily recognizes opportunity in the changing transportation landscape. She recently demonstrated this ability through her active involvement with the state of Louisiana’s planning efforts for the Volkswagen Settlement, and extending her expertise to their state website, mitigation plan, and public notices.

With more than two decades of experience, Jason Wager is one of the longest-serving, active Clean Cities coordinators. In his time at the helm, Wager has shepherded the growth of the Centralina Clean Fuels coalition, and served as an advisor, mentor, and subject matter expert on the Coordinator Council and throughout the Clean Cities network.

Wager’s calm-headed, low-key approach has helped Centralina Clean Fuels stay at the forefront of issues and dialogue across the network of Clean Cities coalitions. A staunch advocate of alternative fuels and advanced vehicles, Wager has worked tirelessly to advance collaborations among Clean Cities coalitions in North Carolina, the Southeast, and nationwide. This talent became evident in recent years as he worked to establish alternative fueling and charging infrastructure along national highways in North Carolina and neighboring states. His current leadership has also resulted in a first-of-its-kind Autonomous Vehicle Readiness Planning strategy, including a three-part community engagement workshop. The effort led to creation of the Autonomous and Connected Vehicle Roadmap.

During his time as coordinator, Wager has been steering committee member for Plug-in NC and a member of the North Carolina Sustainable Energy Association’s EV Working Group. He also serves as the Sustainability Program Manager at the Centralina Council of Governments, the coalition’s host agency.

Congratulations to all four of these impressive coordinators as they pursue alternative fuels projects in 2019 and beyond!