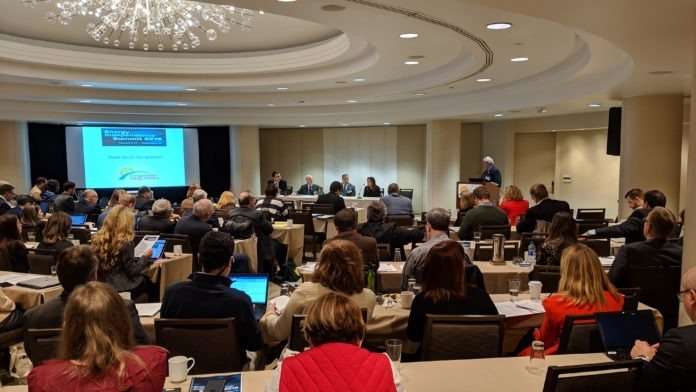 The 2019 Energy Independence Summit (EIS), presented by Transportation Energy Partners (TEP) and held February 11-13, marked some big changes for the organization and continued success with the event and its goals.

Attendance at the 2019 Summit on February 11-13 was up – particularly among local stakeholders and Clean Cities coordinators. This year’s sponsors included:

On Tuesday, the 12th, leaders made over 240 combined visits to Congressional offices on Capitol Hill. The primary focus was education about the work of local coalitions, fleets and industry stakeholders. In addition, some delegation members were able to focus on TEP’s policy priorities, including:

This year also marks the 20-year anniversary of formation of National Clean Cities Inc (NCCI), the forerunner to TEP. Many people may not be aware that the USDOE Clean Cities program encouraged formation of NCCI to help support a small but increasing number of coalitions that were forming or transitioning to become non-profit organizations and needed assistance. NCCI’s Board included only industry members, no coalitions, and the organization was able to hold a few small “Washington Days” events. NCCI changed its name to TEP in 2006 but was not able to continue. Fortunately, some committed Clean Cities coordinators were able to join forces with a few of the existing TEP industry Board members to reorganize and revive the organization. The newly formed Board also revived and held the first annual EIS in 2008.

The organization has come a long way over 12 years. Perhaps its greatest success has been to increase the awareness and support from Congress for the work of local Clean Cities coalitions and the impacts of the program overall. TEP’s annual Summit has become the nation’s premier fuel/technology inclusive policy conference. In addition to increasing awareness and support, TEP has greatly impacted Congressional appropriations for Clean Cities and support for key policies such as tax credits, the RFS and much more. While still relatively small in annual budget, TEP punches above its weight and has become indispensable for its work with coalitions, stakeholders and policy-makers.

For those who missed the Summit this year, you can contact your local Clean Cities coalitions about how you can support these efforts. Finally, be sure to mark your calendars now for the 2020 version of the Summit, February 9-12, 2020.