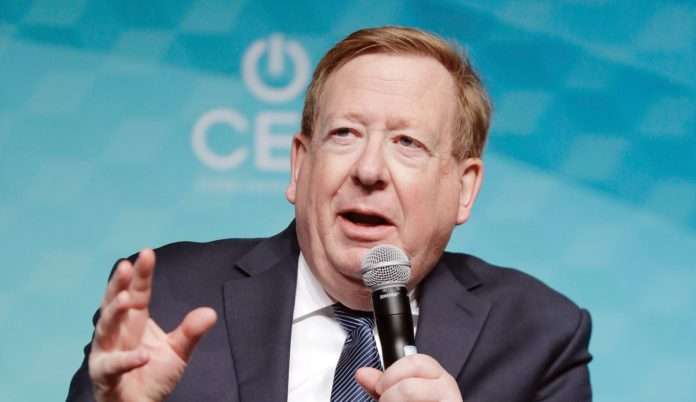 James Brainard, one of the longest-serving mayors in Indiana, is used to being one of the only Republicans in the room talking about climate change.

Years before Republican lawmakers on Capitol Hill were crafting a climate strategy, Brainard, the mayor of Carmel, Indiana, was replacing his city’s street lights with LEDs, transitioning his police fleet to hybrid vehicles, and constructing roundabouts to cut down on traffic. He did it all in the name of curbing greenhouse gas emissions.

In 2014, Brainard served as one of only four Republicans on a 26-member climate change and resilience task force of local leaders convened by the Obama White House. He’s long co-chaired the U.S. Conference of Mayors’s Energy Independence and Climate Protection task force, helping drive the conference’s clean energy work. In December, Brainard was chosen as one of just two Republicans to serve on the steering committee for Climate Mayors, a group of more than 400 mayors committed to the Paris climate agreement goals.

To Brainard, working to slash greenhouse gas emissions is a no-brainer, and it shouldn’t be a partisan issue.

“Whether one believes climate science or not, why wouldn’t a conservative want to assume the majority of the world’s scientists are correct and plan for it?” Brainard told the Washington Examiner during a sit-down interview while in Washington for the U.S. Conference of Mayors’s winter meeting.

“It seems to me somewhat reckless for conservatives to simply disregard what most of our apolitical scientists are telling us about climate,” he said.

Brainard, 65, was just elected to his seventh term as mayor of Carmel, located north of Indianapolis. The city’s population has grown five-fold, from around 20,000 to more than 100,000, since his first election in 1995.

The secret to Brainard’s climate work in his backyard is city design.

Brainard considers suburban sprawl not only inefficient and expensive but also much less sustainable. “These things are all related to climate change too — because if we build an unhealthy city, we also put out a lot of carbon building that city,” he said.

In the years he’s been mayor of Carmel, Brainard has increased parks and other green spaces, put in around 200 miles of bike- and footpaths, and transformed the city’s downtown into a walkable, less car-dense zone.

And perhaps most famously, Brainard has knocked out 132 of the city’s intersections, replacing them with roundabouts — the most in any city in the United States, earning Carmel the nickname “Roundabout Capital of the U.S.”

Those roundabouts, though, pack a significant climate and energy punch. In 2020 alone, Carmel’s roundabouts are estimated to save 2.64 million gallons of fuel, around 293 tankers’ worth. That will avoid about 26,000 tons of carbon emissions, according to a formula from the city’s engineers.

Brainard said he got the idea to put in roundabouts when he saw them in England during the early 1980s studying at Oxford for part of his law degree.

“I was a history major and a lawyer. I didn’t know anything about engineering, but when I became mayor, I remembered that and just always thought they handle the traffic so much better than traffic lights,” he said. He directed one of his engineers to look into it, and they began to put in roundabouts.

Now, Carmel has only about 15 stoplights left, all with LED lightbulbs, Brainard said, adding that he has plans for at least six more roundabouts in the next year.

Brainard’s success with roundabouts and his emphasis on city design in general have earned him national recognition. The Carmel mayor has traveled across the country to speak about his work to cities in states such as Wisconsin, New York, and California. In June of this year, Brainard will host the biannual conference of the International Making Cities Livable Council at Carmel’s Center for Performing Arts, which Brainard shepherded the construction of as part of his efforts to transform the downtown area.

In general, mayors are starting to talk much more about city design as it relates to climate change, said James Ritchotte, the executive director of Climate Mayors.

“It checks several boxes that mayors are focused on — environmental benefits, of course, but it also improves the economy of areas, encourages greater interaction among the community, and attracts families and new residents to a particular neighborhood,” Ritchotte added.

Climate Mayors, formed in 2017 as President Trump was weighing whether to pull the U.S. from the Paris Agreement, now has more than 430 members. One other Republican mayor, Kevin Faulconer of San Diego, will serve on the steering committee with Brainard.

While members of Climate Mayors are predominantly Democratic, Ritchotte said he sees less partisanship over climate change at the local level.

That’s because mayors are problem-solvers, Ritchotte said. “One of the things that mayors often like to say is they know where the potholes are, those are both figurative and literal, and they have to fix them.”

Brainard said some of his Republican colleagues question whether addressing climate change is “worth it,” but most don’t.

He’s also optimistic that the political shift among Republicans on Capitol Hill is here to stay, pointing to work from his own state’s Sen. Mike Braun, a Republican, to form the Senate’s first bipartisan climate caucus last year.

“As we see weather impacted by climate change, it’s going to become increasingly hard to ignore the issue,” Brainard said. “I believe we should try to mitigate the change, or at the very least, we have to adapt to it and create more resilient cities, and that’s going to take a partnership between the federal government and local counties and cities and towns.”

In the meantime, though, Brainard won’t be shy about speaking up loudly on climate change, even if he’s one of few in his party who does.

“He spoke up all the time. He was unafraid,” said Rohan Patel, a senior adviser for climate and energy in the Obama White House who helped convene the state, local, and tribal leaders climate task force that Brainard served on in 2014.

Patel said he met Brainard around 2011 when he was invited to speak to the Conference of Mayors’s energy and climate task force that Brainard co-chairs.

“At that point, ahead of the Obama reelection, you couldn’t find a Republican that wanted to get close to the issue of climate,” Patel said. While Brainard “didn’t agree with us on a lot of our policies, he fully acknowledged the need to act in bolder, bigger, pragmatic ways,” he added.

“If we do it from a fiscally responsible standpoint, it will also be good for the environment,” Brainard said.

Carmel already sees the effects of warming, the biggest of which is increased flooding, he said, adding the city has likely had to spend millions more on hardening stormwater systems due to climate change.

Brainard is also insistent that his city design and clean energy initiatives — from the roundabouts to adding parks and bike lanes to weaning the city off coal electricity by using waste-to-energy plants and solar fields — make the city better for residents overall. It seems to be paying off: The Indiana suburban city was named the best place to live in the U.S. by the ranking agency Niche in both 2017 and 2018.

“We’re just like Paris in France. No mountains, no oceans, and lousy weather, and they did just fine,” he said of Carmel, chuckling at first but then serious. “Because they built a beautiful city. So, it’s our job to build a beautiful, sustainable city.”

NEXT: DISPLACING PETROLEUM IN THE LANDSCAPING INDUSTRY