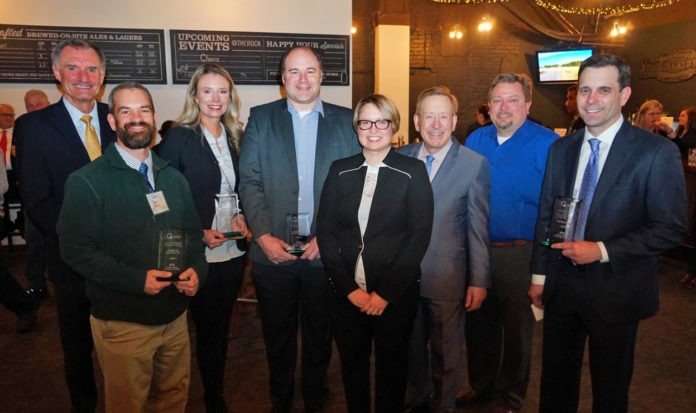 This year’s winners include: Landscape Solutions LLC, Tippecanoe School Corporation, City of Carmel, CityBus Lafayette, Kinetrex Energy, and the Indianapolis Airport Authority. Larry Campbell, Fleet Director for the City of Fort Wayne, was recognized for his Leadership with Greater Indiana Clean Cities for 17 years. Biofuels Director Helena Jette and the Indiana Corn Marketing Board were also awarded the Driver of Change Award for the Indiana Ethanol Promotion and Education Initiative to educate consumers, legislators, and industry stakeholders on the health and environmental benefits of ethanol and ethanol-blended fuels in Indiana.

“The award winners we are honoring are leaders for others to follow and adopt the use of alternative fuels, vehicles, and technologies,” said Kerri Garvin, Executive Director, Greater Indiana Clean Cities. “The actions made by these partners are helping to improve the air quality in Indiana by reducing harmful emissions from vehicles. Supporting alternative fuels not only improves our air, but also promotes our local economy.”

Best Achievement – Propane Autogas: Landscape Solutions, LLC
Landscape Solutions, LLC has grown the largest alternative fuel mowing fleet in Indiana. They started with the innovative approach of integrating their fleet with mowers powered by propane instead of gasoline. They also converted all of their production vehicles to propane. Since 2013, the majority of their production vehicles are powered by propane. Their staff also drive a plug-in hybrid electric vehicle Landscape Solutions partnered with local support to build the largest alternative landscape fleet in Indiana. McGavic Outdoor Power & Hare Truck Center have joined the Landscape Solutions team partnering to build the fleet. The result is a growing business and fleet of equipment, while decreasing their carbon footprint and negative impact on the environment.

Outstanding Board Leadership: Larry Campbell
Larry Campbell has served 17 years on the Greater Indiana Clean Cities Board of Directors, as a President, Vice President, and Director. When his peers nominated Larry for this recognition, they used the following words: Dedication, loyalty, time commitment, guidance, embracing the mission – calm, stable, reliable, thoughtful, and resilient.

Larry is known as the “go-to” person for municipal fleet questions and has received various accolades for his exceptional work as the Fleet Director for the City of Fort Wayne. Larry continues to this day, sharing the mission of Greater Indiana Clean Cities and supporting the adoption of alternative fuels.

Clean Fleet Leader: City of Carmel
In early 2019, the City’s Police Department began switching its fleet of patrol cars from regular gasoline-powered vehicles to Ford Hybrid Interceptors. This will provide for an estimated annual savings of nearly $400,000 once the entire 130-car fleet is replaced. The move to hybrid engines is better for the environment, thanks to a reduction in the amount of carbon dioxide released into the air.

Carmel now has 122 roundabouts, more than any other U.S. city – Roundabouts reduce injury accidents, fuel use and harmful emissions – as the start and stop movement of traffic is all but eliminated. It is estimated that replacing stop-light intersections with 122 roundabouts saves drivers in their community about 272 tanker trucks of fuel per year, which translates into a reduction of carbon emissions by approximately 27,816 tons annually.

Clean Air Champion – Compressed Natural Gas: CityBus Lafayette
In 2015, this CityBus Lafayette made a commitment to begin converting their fleet to Compressed Natural Gas (CNG), with a goal of 50% CNG by 2025. In 2019, they added two more 40′ CNG buses and one CNG Paratransit van to their fleet, bringing the total CNG vehicles to 36. In addition, they use 22 Hybrid Diesel-Electric buses – bringing their alternative fuel vehicles to 74% of their total fleet.

Thanks to Volkswagen Settlement funds, there are four 40′ CNG buses on order for 2020, with two more to be ordered this spring. It is anticipated this year, with the delivery of six more CNG buses, CNG vehicles will exceed 50% of the fleet with 42 CNG vehicles in service.

As a result, CityBus Lafayette is going to reach their goal of 50% of the fleet being comprised of CNG vehicles five years early.

It is the largest RNG project in Indiana. The RNG from the landfill will fuel Class 8 vehicles throughout the Midwest and will replace over 8 million gallons of diesel. The plant’s reduction in greenhouse gas emissions is equivalent to removing up to 19,000 passenger cars from the road each year.

The new plant will sell the RNG to Kinetrex Energy where it will be turned into liquefied natural gas (LNG) and sold to Midwest transportation fleets.

In February of this year, Kinetrex Energy and UPS jointly announced a 6-year renewable natural gas (RNG) supply agreement. The agreement will supply UPS with up to 52.5 million gallons of RNG to be used in Class 8 vehicles throughout the Midwest from its Indianapolis RNG plant. The RNG will be used to fuel UPS’ LNG-powered fleets in Chicago, Toledo, Columbus, St. Louis and Indianapolis.
Kinetrex also uses LNG in their own fleet, which travel over 100,000 miles per year.

Driver of Change – Biofuels: Helena Jette and Indiana Corn Marketing Board
The Indiana Corn Marketing Council partnered with the American Lung Association (ALA) to create the Indiana Ethanol Promotion and Education Initiative (IEPEI) to educate consumers, legislators, and industry stakeholders on the health and environmental benefits of ethanol and ethanol-blended fuels in Indiana. The Program is administered through the ALA’s Clean Air Choice© alternative fuels and technologies transportation program.

Phase I engages stakeholders and consumers through station events and educational seminars, like the 2019 High Octane Fuel Summit held at the Dallara IndyCar Factory in Speedway, Indiana. The event highlighted the benefits and opportunities provided by blending higher percentages of ethanol into gasoline to a crowd of more than 150 influencers, policymakers, and stakeholders.

Phase II of the multi-year program will partner with fuel retailers to enhance their customer loyalty and rewards programs. It will create customizable tools like a carbon reduction calculator that will quantify a customer’s carbon savings on a transactional, monthly, or quarterly basis and email them a report. It will also use a similar calculator to track the fuel retailer’s cumulative carbon reduction on a monthly, quarterly, or yearly basis for each station or the entire organization, making it possible for retailers to post the carbon reductions in-store and online.

In addition to this Program, the organization regularly invests checkoff dollars in ethanol fueling infrastructure grants, providing up to $20,000 per station for the installation of ethanol dispensers that dispense e15, e85, or a combination of blends (ex. e15 and e85 or e15, e30, e40, and e85).

To date, the program has provided funding for the installation of more than 150 ethanol dispensers at more than 100 fuel retail sites in Indiana. The Indiana Corn Marketing Council’s strategic investments and partnerships will result in lower tailpipe and carbon emissions in consumer vehicles. These lower emissions will contribute to improved health and wellness of citizens throughout Indiana and sections of neighboring states.

About Greater Indiana Clean Cities:
Greater Indiana Clean Cities is a standalone nonprofit 501(c)3 organization serving most of the state, 76 counties, working with public and private sector members. Their mission is to advance alternative, domestic fueled transportation including energy efficient technologies across all sectors in Indiana. The coalition’s membership is comprised of cities, schools, equipment manufacturers, fuel providers, state and local agencies, federal departments, and utility companies. These stakeholders come together to share information and resources, educate the public, and collaborate on projects that increase alternative fuel use.
The coalition is one of nearly 100 coalitions across the country affiliated with the U.S. Department of Energy’s Clean Cities program, which brings together stakeholders to increase the use of alternative fuel and advanced-vehicle technologies. Greater Indiana hosts educational and networking events fostering opportunities for partnerships between fleets and industry providers. By facilitating these partnerships and projects, Greater Indiana is fostering the economic, environmental, and energy security of the United States.

RELATED: CHARGE! 18 DAYS ON THE ROAD BY ELECTRIC VEHICLE