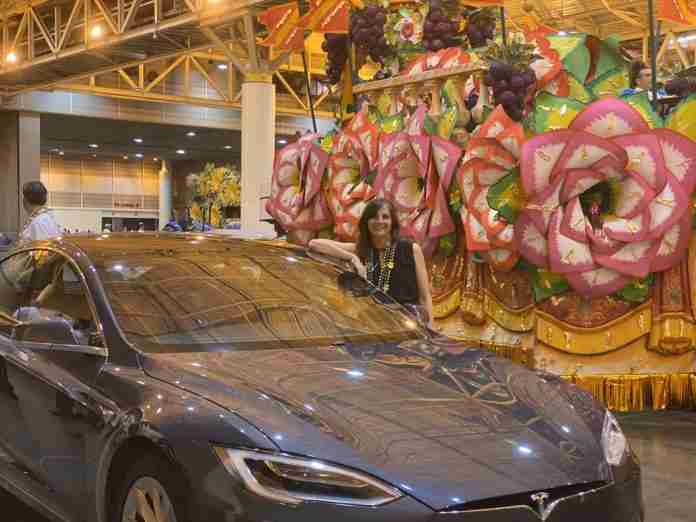 On January 15th, 2020, I received a text from a friend and fellow Tesla owner, Casey Meyer. She wanted to know if I would be interested in driving my 2019 Model S in the Orpheus parade on February 24th to escort a parade Marshall. The offer came with a major perk, two free tickets to the ball later that night. As a former New Orleans resident and lover of Mardi Gras, I of course jumped at the opportunity.

Normally, the more distinguished (i.e.: Wealthy) Mardi Gras krewes would get the vehicles for their marshals from luxury car dealerships on loan – such as Mercedes or Cadillacs. But this year, their members wanted be more forward thinking and began looking into how to get Tesla involved. Since there are no dealerships in Louisiana, the Krewe of Orpheus reached out to Tesla’s new service center in New Orleans to borrow a few vehicles for the parade. The service center replied that they couldn’t provide any vehicles, but that they could connect them with some owners. The service center knew about a Facebook group of enthusiastic Tesla owners and connected the Krewe of Orpheus with Casey Meyer. Casey knew exactly how to round up enough volunteers. She was, after all, one of the founding members of the Louisiana Tesla Owners and Dreamers Facebook group; a group that was recently given an award by Louisiana Clean Fuels for their volunteerism.

About Krewe of Orpheus
“Founded in 1993, the Krewe of Orpheus takes its name from Zeus and Calliope’s
musically inclined son. Founding members include musician/actor Harry Connick, Jr. and
his father, Harry Connick, Sr., former New Orleans district attorney. With their first
parade in 1994, the krewe of 700 members established itself as a super krewe. They
were the first super Krewe to allow both male and female riders.”
Via https://www.mardigrasneworleans.com

The LA Tesla Owners and Dreamers turned out to be the perfect group to represent EV owners at this hugely popular event. We ended up with a couple of each model: two Model Xs, three Model 3s and my car, the sole Model S. But I almost didn’t make it to the parade (or the ball) in time…

On February 24, 2020, on Lundi Gras (the day before Mardi Gras), I got up early and packed for the day’s adventure. Part of my preparations were to make sure that I had charged my car up to 100% the night before. With a maximum range of 370 miles, I knew my Model S would handle this new challenge like a champ. But you can never be too careful. The parade route was approximately 5 miles long and the drive from my home to New Orleans was an additional 66 miles each way, leaving me over 200 miles of extra range for any unforeseen circumstances that may arise.

The plan was to meet up with the other 5 Teslas at the new Tesla Service Center on Tchoupitoulas at 12:45 PM and then drive over as a group to the Morial Convention Center.

Knowing how bad Mardi Gras traffic can be, I left the house at 10AM. In a last second, impulsive detour, I pulled off the interstate to run into a boutique that I love to get a dress for the ball. My “driving” dress was nice and comfortable, but I got a sudden itch to see if I could find something nicer. I ran into the boutique and said, “Can you get me in a nicer dress in the next 5 minutes?” Challenge accepted, I was out the door in 10 minutes flat with a new ball gown delicately laid out in my trunk. That detour may have cost me a lot of money, but it may have also saved my life.

By the time I was on the twin spans approaching the La Place exit, I noticed something was horribly wrong. Traffic had come to a sudden stop on part of the I-10 running through the swamp. With nowhere to go and no way to get off, I put my car in park and waited. Three separate helicopters medevac’d out the dead and injured over the next 3 ½ hours as we all waited helplessly; horrified over the loss of life but grateful that we had been spared.

From here on out, it ran like a well-oiled machine. These guys are pros. It turned out that the parade marshals were not VIPs like I had always thought (they always wore tuxedos, looked bored and never threw any beads). They were, in fact, the safety team for the parade. Literally “Marshals” that helped keep the parade rolling and handled any “snafus” along the way.

The rest of the evening was so much more fun and rewarding than I could have anticipated. As the first car in the parade, just behind the Flambeaux and before the first float, all eyes were on my car. Children waved, poked their parents and screamed, “I love your Tesla!” Teenagers hollered out, “Give me your car!” (To which I replied with an emphatic “No”). Women just smiled and nodded at me with a subtle “thumbs up” while men shouted snarky comments such as, “I hope you don’t run out of gas”, “Are you sure you are gonna make it?” and “She’s not even driving that car, it drives itself!”. The marshals I was escorting wanted in on the fun too and started pretending that it was their car, telling revelers that they were, “letting me drive it”. But my favorite was the chanting. Children from ages 7 on up to college students would chant, “Tesla, Tesla, Tesla!” as we drove by, cheering like we were royalty or celebrities.

When we reached the end of the parade route, someone following my twitter posts, snapped a photo of my car just before I parked and headed in to the ball to stretch my legs and have some fun. At the end of that long, exhausting day (10AM – 1AM), I hopped back into my Model S and entered my destination into the navigation and set off for home, but NOT on autopilot. Why? Because this car is so much fun to drive, why should I let it have all the fun?

When I finally pulled into my garage at 2:30AM, I still had 175 miles of range left on my car. So to everyone who says they can’t buy an EV because of the range – I say, what range anxiety?

NEXT: 27 years of transportation progress