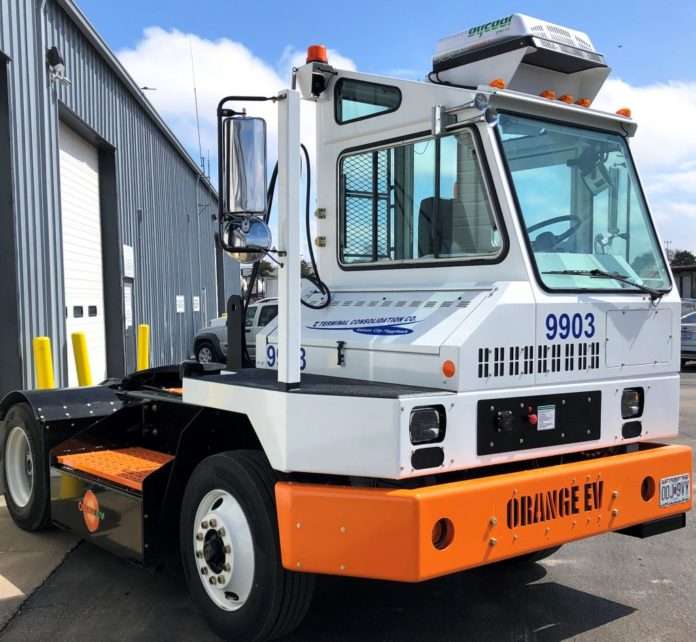 This article was originally published on Orange EV.

Orange EV (OEV) and Terminal Consolidation Co. (TCC) announced the deployment of an Orange EV T-Series pure-electric terminal truck to move shipping containers at TCC’s Kansas City, Missouri, operation. With this deployment, Terminal Consolidation removed a 20-year-old diesel from operation and became the first fleet in the State of Missouri to deploy a 100% electric Class 8 truck.

“We applaud forward-looking fleets like Terminal Consolidation and are proud to not only deliver an emission-free truck, but also increase the environmental benefit by reusing the cab and frame from their 1999 diesel,” commented Wayne Mathisen, Orange EV CEO. “Although most customers purchase new Orange EV electric trucks, fleets can further reduce costs by providing an older diesel for Orange EV to thoroughly remanufacture.”

Terminal Consolidation, aka Kansas City Piggyback, operates several facilities in the Kansas City area serving the intermodal industry. Like other companies facilitating goods movement, TCC has been deemed essential and has continued operations. “We are always looking to take advantage of new technology, systems, and equipment to make us more efficient,” said David Aubrey, Terminal Consolidation’s General Manager, “but now more than ever, it’s important to provide the best tools to keep our personnel safe and healthy.”

“Diesels have been the mainstay in our industry for years but the engines are loud, dirty, and fuel hungry,” continued Aubrey. “With our new Orange EV truck, we expect to see fuel and maintenance savings while also providing a better environment for drivers and site workers.”

Orange EV trucks have less noise and vibration than diesels, and regenerative braking reduces both stopping distance and stopping time. During the remanufacture (aka re-power) process, OEV eliminates the diesel engine, transmission, radiator, and systems for diesel fueling, exhaust, and emission control. With fewer, mostly maintenance-free elements, Orange EV’s moderate-use fleets report annual savings of up to $20,000-$40,000 per truck on fuel, maintenance, repair, and downtime; heavy-use 24/7 operations can save up to $60,000 per truck per year.

“We anticipate that going green with Orange EV will be better all-around: for the environment, for drivers, and for bottom-line operations,” stated Aubrey.