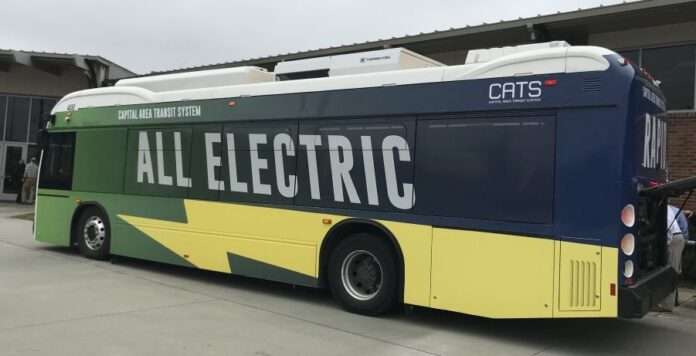 Have you seen the smart looking green and yellow Capital Area Transit System buses driving around Baton Rouge? These “green” new buses are so quiet that many Baton Rouge residents may not have noticed them yet.

In 2019, Capital Area Transit System (CATS), the transit authority in Baton Rouge, added three new electric buses to its fleet, with hopes to continue the transition to electric in years to come. CATS currently has three 35-foot electric BYD buses in operation and three more were ordered in December. The agency will be ordering an additional three electric BYD buses by October 2020.

While it is not uncommon to see electric buses in the fleets of larger cities, they are more of a rarity in mid-sized Southern cities like Baton Rouge. So what prompted CATS to make this addition to their fleet?

In 2014, Capital Area Transit System commissioned a study by the University of New Orleans Transportation Institute in order to review alternative fuel options for its fleet. At the time, CATS knew that some of its fleet would reach its useful age and need to be replaced. This set the stage to commission a study to assist with determining whether alternatively fueled buses could reduce costs and promote environmental sustainability.

At the time the study was commissioned, CATS buses burned through about 2,000 gallons of fuel per day. The CATS fleet currently has 57 conventional diesel buses, 3 trolleys and 16 cutaway vans. A variety of alternative fuel options are available for public transit fleets, including compressed natural gas, liquified petroleum gas, biodiesel and electric or hybrid-electric, but the UNO study specifically recommended the switch to electric. After weighing specifics like feasibility and climate conditions specific to Baton Rouge, CATS decided to follow UNO’s recommendation to go electric.

Procuring buses with new technologies is not always easy. CATS was charged with quickly finding funding sources and a manufacturer that could meet deadlines on deliverables. Around this time, Louisiana Clean Fuels hosted an electric bus demonstration at the transit shelter in town square and invited local decision makers, CATS staff and board members along for the ride. On this ride, LCF and their stakeholders were able to inform CATS of an upcoming FTA grant opportunity and offered to provide assistance with their grant application. The demo was a success and solidified local leadership’s support for CATS’s decision to procure electric buses.

CATS applied for the competitive grant funding – with assistance from Capital Region Planning Commission, Louisiana Department of Transportation – from the Federal Transit Administration’s Low to No- Emissions Program and received $2.5 million in 2019, in combination with other Federal funds, to purchase their first three buses.

In April 2020, CATS announced it received an additional $3.8 million FTA grant to procure additional buses. CATS also received some local matching funds for the project. The FTA Low to No Emissions program is the same grant that in 2016 awarded $3.9 million to Sportran in Shreveport LA to purchase its first five electric buses, three depot chargers and an on-route fast charger. The Shreveport transit agency also received $1.5 million in August of 2018 for additional electric buses.

If one could offer advice to another fleet looking to procure electric buses, CATS Communications Director, Amie McNaylor, says she suggests engaging the experts. McNaylor credits the help of industry experts in navigating the process of procuring buses with unfamiliar technology. McNaylor described that, during the ordering process, electric bus batteries improved from the first generation to second generation batteries with longer ranges, and having an expert around smoothed out these bumps in the process. Louisiana Clean Fuels connected CATS staff with industry experts and experienced EV transit bus fleet managers who acted as a liaison of sorts between CATS and the manufacturer, asking the right questions and finding the right specifications for CATS’ unique needs.

After hammering out the details, CATS ultimately purchased three 35-foot electric buses manufactured in California by BYD. These buses can reach 62 miles per hour speeds and seat 32 passengers, with additional capacity for standing passengers. BYD estimates its buses cost about $1 less per mile to operate when compared to diesel buses. CATS will also save on maintenance costs as electric vehicles do not require oil changes.

Aside from cost savings and emissions reduction, McNaylor says the public has responded favorably to the new electric buses. Some riders have tweeted that the buses are much quieter, and people tend to be drawn to the electric buses at press events. CATS operators seem to enjoy driving the new buses as well.

So what’s next for CATS? CATS is continuing to work on expanding the electric vehicles in the agency’s fleet. Additional electric buses will be purchased that will serve as the flagship of the Plank/Nicholson Bus Rapid Transit (BRT) Corridor, a collaboration with the City-Parish and Build Baton Rouge. These buses will make possible the 15-20 frequency of the morning and afternoon peak hours on the BRT corridor; there will be 30-minute frequency during the base time of the route.

In the meantime, the three recently-ordered buses are in the manufacturing process and will be incorporated into the fleet soon, and CATS also hopes to install more electric bus charging stations at its maintenance facility.

In Pursuit of Savings: Indiana town shifting to EVs to save...