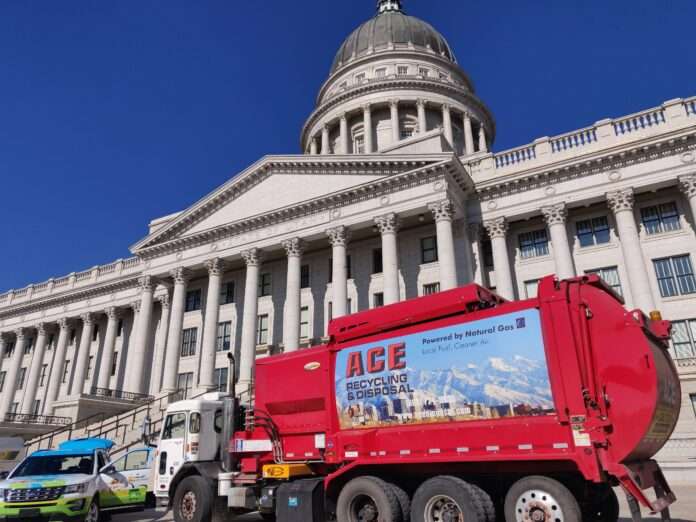 ACE Recycling and Disposal is one of the largest independent waste haulers in the western United States and has become known as a leader in cutting-edge green technologies.

In 2008, the company adopted alternative fuels and now has a fleet of 194 vehicles, 99 of which are heavy-duty, compressing natural gas (CNG) refuse haulers. In addition to implementing the use of alternative fuels, ACE has improved recycling programs along the Wasatch Front, adopted geothermal energy systems and powers its West Valley Headquarters with solar panels.

ACE completed the grant applications process independently but leveraged Utah Clean Cities Coalition (UCCC) to push legislation to cut company costs and reduce emissions through the adoption of CNGs. To achieve this, UCCC and the state of Utah provided ACE with tax grants for a combined total of $35,000 in tax credits per truck. Over 50% of the company’s fleet is now composed of CNG trucks, and they are continuing to integrate more CNG vehicles as they expand.

Two years later, ACE constructed its first private fueling station which greatly reduced fuelling costs. However, there was not a set OEM standard for how to implement CNG, whereas today there are standardized protocols. This was an obstacle until 2013 when there was a huge break in the technology barrier with the development of high-quality fuel systems. This was a huge milestone in ACE’s success, leading to even greater fuel savings and a highly feasible project.

“Our business is based upon cleaning up our environment—the methods we choose to achieve this need to align with our purpose,” said Matt Stalsberg, ACE owner and general manager. “Our commitment to clean fuel technologies reduces our environmental impact, provides the best value for our communities, and tells Utah we believe in responsible business. Today, CNG is a clean fuel that trucking companies in our region can choose, and we’re excited to see what the future of clean energy holds.”

When asked about the cost savings, Stalsberg stated that it was a “no brainer” when you look at the net savings with the increased investment. The trucks cost more, but the return on investment (ROI) is three to four years for an eight-year truck.

The addition of their own station saved ACE substantially more when they started to buy gas in bulk. There are also significant tax credit savings to compressing your own gas with your own station.

One of the greatest obstacles with adopting CNG reported by Stalsberg was the learning curve of alternative fuel technology and common misconceptions about the fuel.

Training was conducted by a shop member with a certification (CNG-FSI) to work on CNG trucks which allowed for a better understanding of the technology. Following the training, the ACE team noted that it made them pioneers in safely utilizing CNG.

About 50 firefighters from across Utah met at the ACE headquarters for training on the effective implementation of CNG technology.

ACE even created its own CNG mechanical safety video to address some of the common misconceptions around this alternative fuel.

Implementing CNG technology also meant retro-fitting the mechanics’ workshop due to the different shop standards for CNG. Overall, the retro-fitting took approximately two weeks to complete and cost around $100,000.

ACE also noted that the changes and safety protocols were ultra-conservative and created a safer shop overall for greater peace of mind for their employees.

Since the first private CNG fuelling station was constructed at the company headquarters in 2010, two more private stations in Clearfield and West Jordan have been added.

In summary, adopting CNG allowed ACE to achieve the projected economic savings by reducing fuel costs by 50%. After utilizing private stations in the first few years, after CNG integration, ACE was able to install three of its own facilities with CNG fueling capabilities.

“We are now viewed as more than just a garbage hauler, from customers to our peers, we hear about how great our fleet is,” said Mercedes Anto, ACE sustainability director.

Moving forward, ACE’s goal is to have a fleet composed of 90% CNG trucks. The company has also expressed interest in the adoption of electric refuse haulers as the technology is refined.

Their advice to any fleet manager who is looking to adopt CNG is that the varying national price may make it more feasible in certain locations. When it is feasible, it not only leads to significant cost savings but, as the ACE team has experienced, this leadership increases company leadership in green technology and alternative fuels.