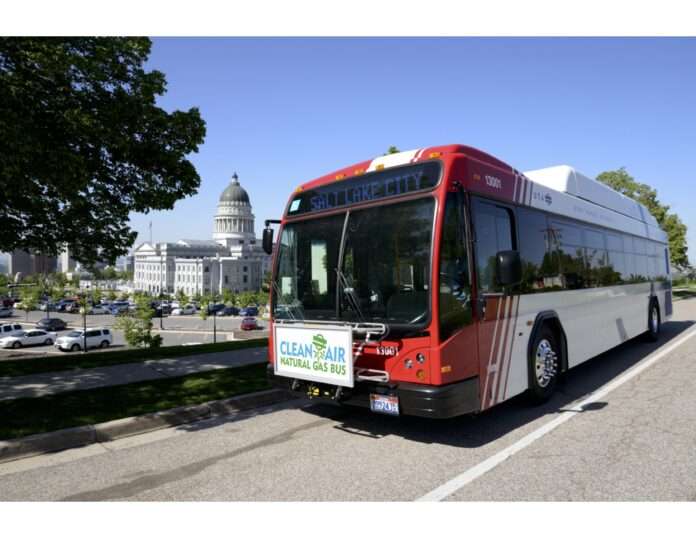 In 2013, UTA officially adopted alternative sources of energy to its fleet to cut fuel costs, reduce air pollution and increase resiliency within Utah’s public transportation sector. Utah Clean Cities (UCC) was one of the original partners involved in this transition and is proud to support UTA’s adoption of electric-powered buses and CNG powered engines.

To address this issue and support economic development, energy security and more, UTA has set long-term goals to have a third of its fleet include CNG buses, a third electric and a third diesel.

To achieve these goals, they are investing over $90 million in the development of a CNG standard garage through a project called the UTA Depot District Clean Fuels Technology Center. When completed, the Depot District will allow UTA to continue to increase its fleet of clean fuel buses such as compressed natural gas (CNG) and electric (EV).

The motivation behind the Depot District Center includes an increase in energy security, cost savings, emissions reduction and economic development. The total project investment is estimated at approximately $94.8 million, and the facilities should be fully operational by early 2023.

The site for the Depot District Center, located between 200 South and 400 South, was purchased in 2008 following an analysis of other potential locations for a new bus garage that concluded this as the ideal location.

In 2012, following the Environmental Analysis, UTA received a “Finding of No Significant Impact” from the Federal Transit Administration and was able to move the project forward.

In 2013, 47 CNG buses were purchased by UTA and the Depot District served as garage housing.

By 2018, the facility began on-going construction.

According to UTA’s Benefit-Cost Analysis, due to lack of space in the current antiquated facility that cannot service any additional buses beyond the current 93, there is a need for the new Depot District Center. The facility will be able to maintain 150 buses initially, with the ability to house up to 250 buses by acquiring additional property for bus parking.

According to Stockley, this project has involved partnerships with many groups on different fronts.

The first CNG buses were implemented in partnership with Utah Clean Cities as the coalition worked closely to distribute ARRA funding.

The itemized breakdown is included below:

Already, the Depot District Center’s CNG fueling facility is supporting 47 CNG buses, which were purchased in 2013 and 2015. The remainder of the facility, currently under construction, is a big step towards formally supporting alternative fuel vehicles as part of UTA’s fleet.

With air quality, a major concern in Utah this project is essential to increase alternative sources of fuel and lessen dependence on traditional sources of energy.

“The addition of CNG buses results in reduced pollutants of CO2, NO, SO2, particulates and VOCs. This approves air quality in an area of the country that struggles, because of its geographic formations, with maintaining good air quality,” UTA said.

The project will also increase fleet resilience and create jobs in an underserved part of the city.

The facilities, located west of the railroad tracks and east of Interstate-15, are in a census tract (1025) that qualifies as economically distressed due to its low per capita incomes. More than one-third of the population in this census tract lives below the poverty level and the area houses a significantly higher rate of minorities than Salt Lake County overall.

By building a larger Depot District Center in the same neighborhood, jobs will be created in an area that is economically disadvantaged and underserved.