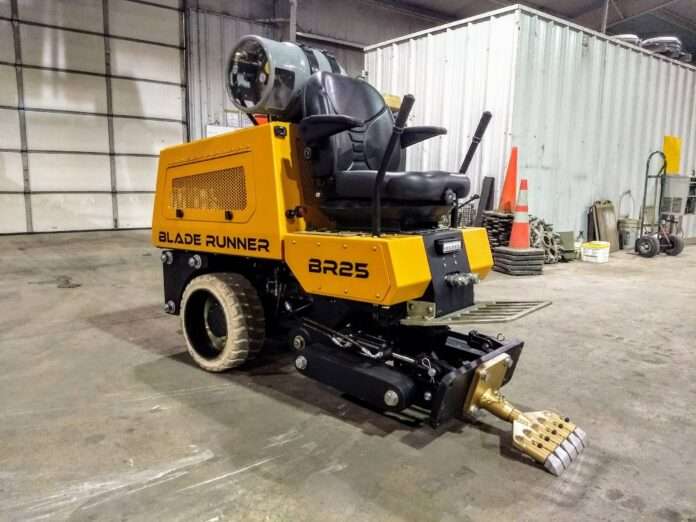 What do they have in common?

More than you would think.

In the early 1980s, Jim Coker was managing a Contract Cleaning Company using propane burnishers (buffers) to polish VCT floors for many commercial accounts across 40 states.

“I can remember,” Coker said, “that many managers of stores said we could not bring combustible engines into their stores because it was not safe.”

Coker not only proved it was safe but also that the customer saw quality results on their floors.

After a successful 20 years in contract cleaning, Coker joined a couple of friends to start a new venture in propane small engine applications. In 2004, Coker introduced the first commercial propane mower.

“There are many benefits,” Coker said. “The biggest benefit was that propane was half the price of gasoline. Another big advantage was the containment of the fuel.”

This is a huge advantage for commercial cutters.

In order to promote commercial propane mowers, Coker joined Heritage Propane in 2009 and started the Metro Lawn Program. Many commercial cutters, municipalities and schools benefited from this program.

After a successful five years, Coker had the opportunity to join R&R Products and start Propane Power Systems that introduced the first golf and turf equipment. The Propane Education Research Council (PERC) funded a program to provide eight golf courses with a set of propane-powered golf equipment.

Propane Power Systems LLC and Briggs & Stratton signed an agreement to allow PPS to convert Briggs & Stratton/ Vanguard engines to propane. This agreement would allow any manufacturer to have the best propane small engine for a variety of applications.

Propane Powered Systems LLC reached out to PERC which helped fund the certification of the Briggs & Stratton/Vanguard propane engines.

Today, Propane Power Systems LLC has 53 certified EPA and California Air Resource Board (CARB) configured propane engines ranging from 203cc to 993cc with 17 pending certifications which will include 12 Electronic Fuel Injection (EFI) engines. All these certified propane engines have power and emission standards in mind when working with equipment manufacturers to offer the right engine for the application.

Safety is at the forefront of all we do which is why PPS applies an EDA (Engine Data Analyzer) to all propane engines that have catalyst mufflers and a carbon monoxide monitor for all engines that are being used in enclosed areas.

Propane is considered a green alternative fuel under the Energy Policy Act of 1992. Propane is domestically produced and is readily abundant. It produces 70% less carbon in the fuel reducing our carbon footprint and greenhouse gas emissions.

Because of the much lower CO2 emissions, forklifts have been used indoors for almost 100 years.

The EPA has put out a warning, under Preventing Carbon Monoxide Poisening from Small Gasoline-Powered Engines and Tools, for the indoor use of gasoline-powered engines and tools. It said:

“Many people using gasoline-powered tools such as high-pressure washers, concrete cutting saws, power trowels, floor buffers, welders, pumps, compressors and generators in buildings or semi-enclosed spaces have been poisoned by carbon monoxide (CO). Carbon monoxide can rapidly accumulate (even in areas that appear to be well ventilated) and build up to dangerous or fatal concentrations within minutes.”

In this document, the EPA gives examples of those affected by these dangers and also gives recommendations such as substitute less hazardous equipment whenever possible.