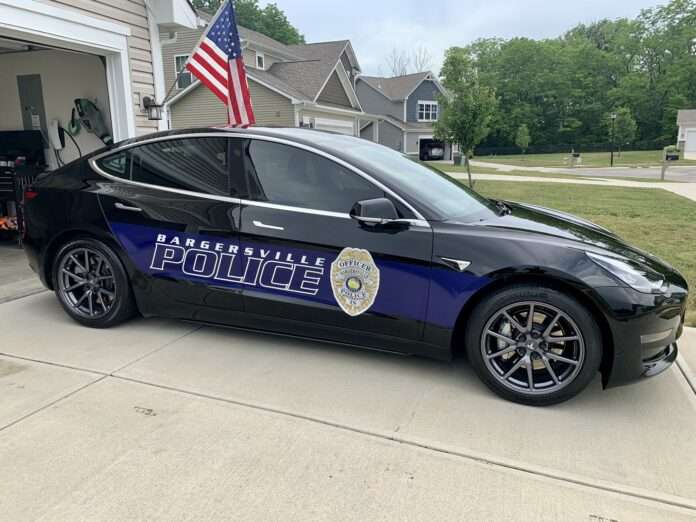 In August 2019, the Bargersville Police Department introduced its first all-electric patrol vehicle, making it one of the first departments in the United States to implement the Tesla Model 3 as a squad car. Since then, three more Tesla Model 3 vehicles have been added to the department’s fleet.

For many years it was believed electric vehicles could not provide the speed, handling and power needed in pursuit vehicles.

“That is not the case,” Todd Bertram, police chief of the Bargersville Police Department said.

Following Bargersville’s lead, the Westport Police Department in Connecticut and the Windham County Sherriff’s Office in Virginia have purchased their first Tesla vehicles.

As shown in the table below, the department’s cost for the Tesla Model 3 was $825 compared to $7,580 for the Dodge Charger.

The Tesla Model 3 vehicle purchase price is $14,500 more than the gasoline-fueled Dodge Charger patrol vehicles the department typically purchases. With the fuel and maintenance savings, the department has seen over the course of the first year, the department expects to recoup its investment in just 19 months.

With the four Tesla Model 3’s currently in the department, the Bargersville Police Department is on track to save approximately $152,000 over the next six years. The department currently has 14 patrol cars.

With an all-electric police fleet, Chief Bertram hopes Bargersville will one day achieve its goal of saving more than $88,500 each year.

The additional savings will go a long way for the Bargersville Police Department. Like many police departments, Bargersville has a finite budget. With the introduction of the all-electric patrol cars, the department could repurpose the dollars saved on fleet fueling and maintenance to fund other budget items without needing to increase the overall budget.

In addition to the cost savings experienced with the addition of an electric vehicle, fleets also benefit
from reduced emissions resulting in cleaner air.

According to the Office of Energy Efficiency and Renewable Energy, direct emissions from conventional vehicles are emitted through the tailpipe, evaporation from the fuel system and during the fueling process. The direct emissions include smogforming pollutants such as nitrogen oxides and greenhouse gases (GHGs), primarily carbon dioxide. In contrast, all-electric vehicles produce zero direct emissions drastically reducing a driver’s environmental impact.

Despite COVID-19, Chief Bertram reported the department saw an “increase in trips taken.”

During the months of March and April 2020, when the pandemic prompted a sharp decrease in travel throughout Indiana, “The electric vehicles saw increased mileage and savings,” Bertram said.

Chief Bertram based his estimate on the average gas price of $1.98. He also included the cost of an oil change the cars would have received if they had been gasoline-fueled.

Similarly, in June 2020, the department saved $933, based on an average gasoline price of $2.15. All estimates are based on nineteen miles-per-gallon the department’s gasoline-fueled patrol cars run on.

The department installed one electric vehicle charger to the side of the Police Department Building and another on town property. In total, the department spent $1,000 to install the EV chargers.

Moving forward, the department hopes to expand the charging infrastructure available to six Level 2 chargers and one DC Fast Charger.

Since August 2019, the department has experienced minimal maintenance-related expenses for its electric vehicles.

“The only time the cars have been up on a lift was to have the tires replaced,” Chief Bertram said.

The vehicles have minimal maintenance requirements keeping the vehicles on the road and out of the shop.

“The department is seeing the savings each month,” Bertram said.

A significant portion of the cost savings associated with electric vehicles comes from the reduction in fuel costs. However, when considering the nature of working vehicles, the maintenance cost savings are often significant over the vehicle’s operational lifetime.

Yearly Maintenance:
Brakes – Brake pads do not require replacement due to regenerative braking. However, Tesla recommends cleaning and lubricating all brake calipers every 12 months or 12,500 miles for cars in cold-weather regions.

Tires – Tesla recommends rotating your tires every 6,250 miles or if tread depth difference is 2/32 in. or greater, whichever comes first. Unbalanced and misaligned wheels affect the handling, tire life and steering components.

Pursuit: When considering vehicles for law enforcement, pursuit and high-speed chase is often the first challenge posed by officers and police councils. Bertram recalls a pursuit early on while in the Model 3 and highlighted a few facts from the chase.

“It was not a high-speed pursuit, most of them are not,” Bertram said. The idea that every pursuit result in a high-speed chase is not reflective of his experience.

“They’re trying to get away from you,” Bertram said. “They’re not trying to race you.”

During these types of pursuits, the EV’s instant acceleration and low volume make it more agile in urban and suburban areas.

Range: When considering the area of operation for officers, the range is often highlighted as the second biggest concern. Rural police departments often have larger jurisdictions, leading some to believe the range of an EV may cause limitations.

“When you start your shift out on an empty tank, the same thing will happen in a gas car,” Bertram said. He went on to say that even with the heat or air-conditioning, lights and computer running the car could run for days.

When asked how the department has addressed their charging situation, Chief Bertram said, “We’ve since put another charger on town property, resulting in more charging options.”

With plans for a new building, the department is also factoring in more Level 2 chargers and a DC fast charging station.

Equipment: Some manufacturers offer pre-outfitted patrol vehicles that come fully equipped with traditional equipment like lighting and auxiliary power. However, in most cases, police departments purchase their vehicles without the added equipment, opting to install after the purchase.

Chief Bertram remarks the benchmark Dodge Charger is no different.

“When you get a $25,000 Dodge Charger, you get an engine with wheels and some seats,” Bertram said. “It doesn’t come with anything. It is stripped down.”

When we compare standard hardware to a modern EV, the details make all the difference.

When asked if the Tesla Model 3 had the features he needed, Chief Bertram said, “Of course the Tesla has all of that, and it gets better over time.”

This is in reference to Tesla’s ability to improve through software updates over the air (wireless capability).

Surveillance: Over the last year, surveillance has been a priority for police departments across the country. The Tesla Model 3 is equipped with eight surround cameras that provide 360 degrees of visibility around the car at up to 250 meters of range. Not only do the built-in cameras help with accident prevention, but they have also aided Chief Bertram in picking up useful footage in the field even before he has begun recording proving invaluable to the department.

Overall, Bertram has found their new electric patrol cars have outperformed the other patrol cars they use.

Bertram gave some advice to departments looking to make the switch.

“I’ve talked to hundreds of police departments from all over the country,” Bertram said. “People have called wanting to know how it’s going, what we did and how we did it.”

“I’ve become a spokesperson for police Tesla adoption because of the savings we’ve experienced and the fact the cars have multiple capabilities. We continue to add them to our fleet,” Bertram said. “Eventually, we would like to have an all-electric vehicle fleet.”

He expressed departments should do their homework when considering an electric patrol car to find out more about the vehicles, their capabilities and the availability of charging stations in the area.

Bertram said he couldn’t see how the electric cars wouldn’t work for an agency or municipality, encouraging departments interested to take a look at the available options and test drive an electric car to see for themselves.