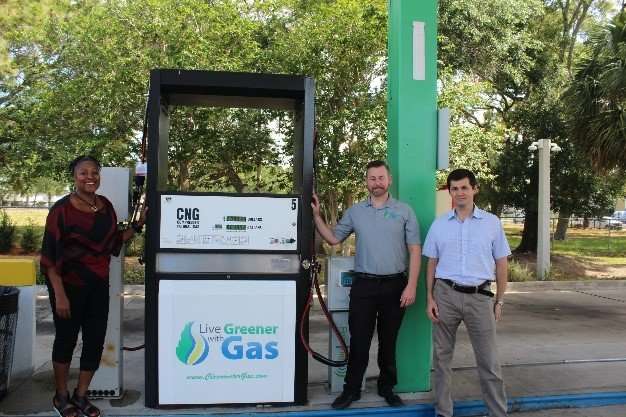 Initially opened in 2011, the station supports more than 130 vehicles per month, providing CNG to the public and to private fleets including Waste Pro and Verizon Frontier. The station also boasts one of the lowest fuel price per GGE in the state of Florida.

Clearwater Gas System partnered with the City of Clearwater Solid Waste Department in 2011 to convert one refuse truck to CNG and has since converted all 73 solid waste trucks, and a total of 116 vehicles, including light-duty, medium-duty, and heavy-duty vehicles. This partnership has been a proven success story, as Gloster points out: “We’re running cleaner, we’re running greener, and our maintenance costs have been cut by at least a third using compressed natural gas vehicles.”

As the station approaches its tenth anniversary, updates to the equipment are expected to increase capacity. Renovations will increase filling from a rate of 13 gallon equivalents per minute to over 20 per minute and will include a higher capacity compressor as well as a backup generator to support the electronics.

Compressed natural gas provides light-, medium-, and heavy-duty vehicles with about the same fuel economy as a conventional gasoline vehicle while producing 10 times fewer emissions. When stored, CNG is compressed to less than 1% of its volume. It is transported over pipelines that are less affected by severe weather events compared to delivery channels for petroleum fuels, making CNG more resilient to fuel supply interruptions caused by natural disasters. A mobile compressor at the Clearwater site is an example of portable fueling infrastructure that supplements permanent equipment, allowing the fueling resources to be relocated based on need.

Tampa Bay Clean Cities is excited to share this informative webinar with explains the many benefits of CNG as an alternative fuel.

NGVAmerica wants you to know that “natural gas is now”