The nonprofit coalition, whose mission is to encourage the use of clean vehicles and clean fuels to support clean air in Chicago and throughout Illinois, recognized Rood with its top annual award at the coalition’s Annual Meeting and Holiday Reception, held at Danada House in Wheaton, Illinois.

Rood manages an Argonne National Laboratory team of experts supporting the U.S. Department of Energy’s Technology Integration program and the Clean Cities Network in several areas such as strategic planning, analysis of the U.S. natural gas, renewable natural gas, and electric-drive markets, management of the development of tools and information on idle-reduction technologies and telematics, emissions reductions, and total cost of ownership of alternative fuels.

In her role, she also manages training programs for international and domestic audiences in alternative fuels and advanced technology vehicles. Rood worked for Clean Cities at the U.S. DOE in Washington, D.C., from 1995 to 2008, where she was instrumental in advancing clean-energy initiatives.

“Marcy has been an advocate for clean fuels in nearly every segment of transportation, including passenger cars, trucks, buses, terminal tractors, airplanes, locomotives, and even tugboats, anything that moves,” John W. Walton, chair of Chicago Area Clean Cities, said. “She’s been on the front lines advancing clean technologies via her work with Argonne National Laboratory, national Clean Cities and as part of our coalition’s team.”

“Marcy was instrumental in establishing and building the national Clean Cities program that today is in more than 75 U.S. markets,” Walton said. “She’s been an advisor to not only our coalition’s team but to coalitions in every region. For all her hard work over the years, Marcy will forever officially be known as a Clean Fuels Champion.”

She provided direction for grant programs, training initiatives, the Alternative Fuels Data Center and assisted in the planning of National Clean Cities conferences. Rood also led the Clean Cities International Program and served as the liaison to the European Commission on clean urban transport programs, which resulted in peer exchanges between Clean Cities and European leaders in alternative fuels.

After leaving Washington, Rood moved to Illinois and became very active in CACC.

“Marcy has always been a great advisor to our coalition and has brought a unique perspective that CACC has benefited from in many ways,” Samantha Bingham, Clean Transportation Program Director for the Chicago Department of Transportation and co-coordinator of Chicago Area Clean Cities, said. “Her guidance has resulted in our coalition preparing winning proposals to bring funding to the region for clean-transportation programs.”

“Marcy also has coordinated the identification of candidates and funding of a strong internship program for CACC for many years,” Bingham said. “She has served our board in a number of different capacities, and we have grown to be one of the strongest and most recognized Clean Cities programs in the country in part because of Marcy’s contributions.”

The Chicago coalition’s Clean Fuels Champion award has been presented annually since 2001 to an individual, organization or business that champions the promotion of alternative fuels and technologies to reduce vehicle emissions and reduce petroleum usage.

CACC, a nonprofit coalition focused on promoting clean transportation in Chicago and the surrounding suburbs, is one of more than 75 coalitions across the country affiliated with the U.S. Department of Energy’s Clean Cities program.

The Chicago coalition concentrates its efforts on educating businesses and municipalities in the six-county metro region, including Cook, DuPage, Kane, Lake, McHenry, and Will counties.

To get involved, visit www.chicagocleancities.org 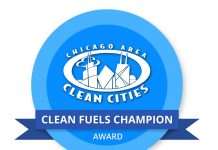 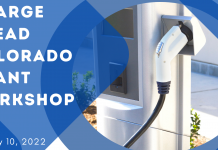