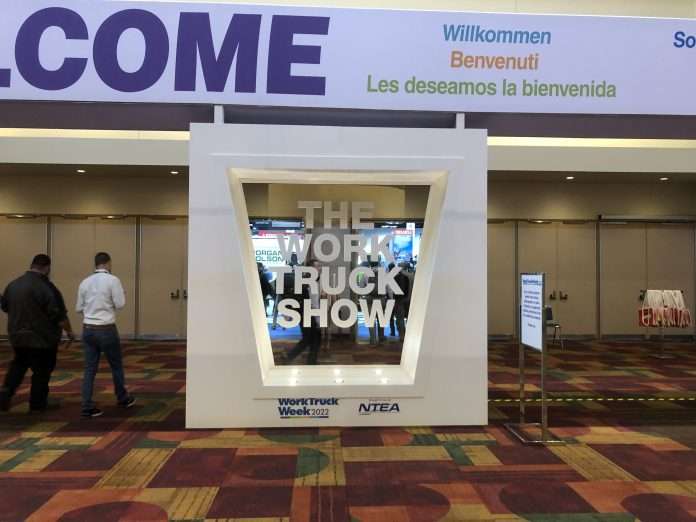 After two years of an in-person hiatus, hundreds of industry partners gathered from March 8 to 11 for Work Truck Week 2022.

Work Truck Week is North America’s largest work truck event, with showrooms, education and training programs, a clean energy summit and a variety of opportunities for networking. Work Truck Week, which includes the Work Truck Show and Green Truck Summit, is put together annually by NTEA, the Association for the Work Truck Industry.

This year’s event was kicked off by the host of MotorWeek, John Davis, as he played his role of master of ceremonies, introducing key clean energy industry partners.

“We’re at the tipping point of transportation electrification,” Davis said during an introduction to the Green Truck Summit.

Topics like EV rebates and grants, fuel cells, upfitting and the ins and outs of electric vehicle charger maintenance were on the schedule, as hundreds of attendees packed the rooms to get a glimpse into the future of zero-emission transportation.

Liane Randolph, Chair of the California Air Resources Board, was the keynote speaker for the Green Truck Summit. She gave the audience a pressing reminder that 15 states and the District of Columbia announced a joint memorandum of understanding in 2020 committing to work together to advance the market for electric medium- and heavy-duty vehicles. That goal is to ensure that 100% of all new medium- and heavy-duty vehicle sales be zero-emission vehicles by 2050.

The emphasis on emerging electric technology remained clear as Ford revealed their expanded charging infrastructure as a part of the Ford Pro program. With the introduction of six new charging equipment and a network that has more than 20,500 charging locations and 70,000 plugs, Ford showed its leaning all-in on electric.

In the following days of the Work Truck Show, the exhibit hall showed that it had an electric edge as well.

Chevrolet and GM showcased the first-ever 2024 Silverado EV which is designed from the ground up on GM’s Utium Platform. It is estimated the Silverado EV will have 400 miles on a full charge, making it one of the longest range EV models on the market.

Although electric vehicles had a big presence at the show, other clean fuels were represented as well.

Clean Fuels Alliance America, formerly known as the National Biodiesel Board, announced the implementation of B100 technology to help the City of Madison, Wisconsin to reach its net zero-emission goals with 100% biodiesel.

During the conference, Ride and Drive events were also available to attendees. This was a chance for people to get behind the wheel and experience the feel of a vehicle for themselves. There were 19 commercial vehicles available to try out on the road, many of them using alternative fuel technology. Some of the vehicles available to test drive included the Workhorse, BrightDrop, the Lion Electric Lion6 and other electric commercial trucks.

Next year’s Work Truck Week will happen again in Indianapolis, Indiana, from March 7–10. Sign up to receive Work Truck Week 2023 updates and notification when registration and housing open here: https://www.worktruckweek.com/wtw23signup