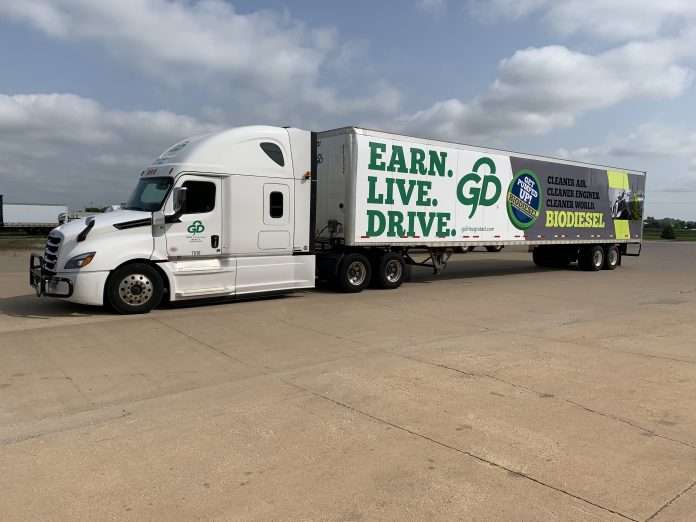 As fleets look to reduce GHG emissions, they are looking beyond improvements in fuel economy to advanced technologies and alternative fuels — which can also offer financial savings over petroleum diesel.

The coronavirus pandemic has underscored how vital the trucking industry is to the national economy. When everything else was locked down, truckers were still on the road carrying food, medical supplies and more to the companies, stores, hospitals and individuals who needed them.

The trucking industry hauls about 70 percent of the freight shipped in the United States, according to the American Transportation Research Institute. Medium- and heavy-duty trucks also account for 23 percent of transportation-related greenhouse gas emissions.

As fleets look to reduce GHG emissions, they are looking beyond improvements in fuel economy to advanced technologies and alternative fuels.

Biodiesel has become a popular option because the switch requires no engine modifications and no drop-off in performance. Biodiesel can also offer financial savings over petroleum diesel because of incentives in several states.

Central Illinois-based G&D Integrated offers transportation, warehousing, and distribution and logistics services for customers in several industries — including heavy-equipment manufacturing agricultural machinery, automotive parts and food packaging. With more than 450 trucks in its fleet traveling more than 24 million miles each year, fleet performance and efficiency are critical to the company’s success.

When G&D Integrated’s fuel supplier began offering biodiesel, G&D was drawn to the claims that the product not only would cost less money but also would offer the same efficiency and performance as petroleum diesel. Other benefits that made biodiesel attractive included lower carbon emissions, reduced engine wear and Illinois tax incentives — sales of diesel blends containing at least 11 percent biodiesel are exempt from Illinois’ 6.25 percent sales tax.

After the company observed no degradation in performance compared with petroleum diesel — even during cold-weather temperatures as low as 10 degrees — G&D Integrated made the decision in 2012 to fuel its fleet of trucks with B20 going forward. All G&D fuel terminals now have B20 at the pumps, and the company tries to divert all its trucks to fuel up in Illinois because B20 isn’t always widely available in other states.

More than 66 percent of the fuel G&D uses in its Illinois fleets is biodiesel — more than 1.6 million gallons annually, which results in the reduction of 1,200 pounds of particulate matter per year.

Using B20 has allowed G&D Integrated to achieve its goals of on-time delivery and maximum efficiency, improving the bottom line without compromising efficiency. The company reports it receives between 12 percent and 20 percent savings compared with retail prices.

Biodiesel has paid off for G&D in other ways, too: Because many companies aim to reduce the environmental impact of their supply chains and incorporate sustainability into their purchasing departments, they often reward contracts to suppliers based on their sustainability programs. G&D’s use of biodiesel is a selling point to these customers, and the company has been awarded freight based on its biodiesel implementation. The company’s commitment to biodiesel has proven to be not just good for the environment, but also good for business.

The Davisons started in 1983 with just one truck — Ed drove, and Sharon ran the business — and eventually expanded beyond its roots in livestock hauling. The company, based in New Holland, Illinois, now has a fleet of about two dozen vehicles — including dump trucks, a bulldozer and backhoe for construction work, and some road maintenance mowers.

The Davisons were unsure at first, as they had heard that biodiesel could affect vehicle performance and warranties. Because biodiesel is considered a “drop-in” solution — meaning fleets of any size can begin using it immediately without investing in new infrastructure, vehicles, engine modifications or technology — they decided to give it a try.

The Davisons’ fears turned out to be unwarranted: The company noticed no power difference in the vehicles’ performance, no matter the age of their engines; and the engines burned cleaner, collecting less carbon buildup and soot on the internal engine parts.

The Davisons also appreciate that using biodiesel supports their local economy. The trucking company is situated in the middle of corn and soybean fields — two crops from which biofuels can be derived — and the company’s use of B20 adds to the value of soybeans that local farmers harvest and S.K. Davison hauls.

S.K Davison now runs biofuels year-round — including throughout the long, cold Illinois winters — and the company displays its commitment to and use of biodiesel everywhere its fleet goes: Its tractor-trailers feature signage touting biodiesel as “America’s All-Weather Fuel.”

G&D Integrated and S.K. Davison are members of the B20 Club, a partnership of the Illinois Soybean Association checkoff program and American Lung Association that recognizes elite Illinois fleets operating their equipment on biodiesel blends of B20 or greater.

This article was previously published by the Sustainable Brands team and the Illinois Soybean Association.