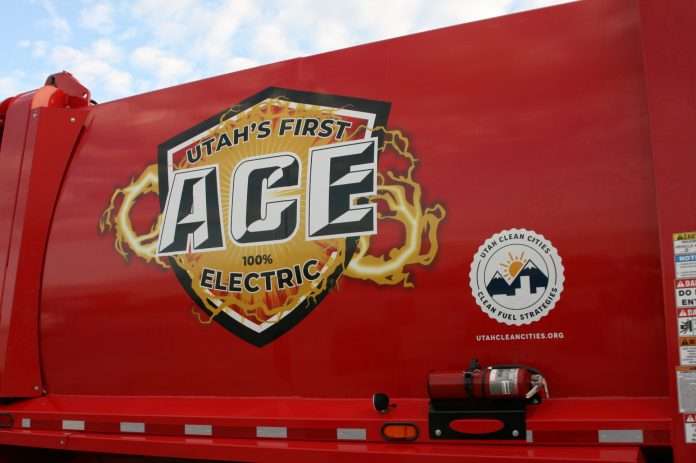 Utah is leading the way in advanced vehicle technology with the debut of the state’s first all-electric Class 8 refuse hauler by ACE Recycling & Disposal. This vehicle and project are supported by Utah Clean Cities, the Utah Department of Environmental Quality, Lancer Energy, Rocky Mountain Power and BYD Motors.

This top-of-the-line electric vehicle was made possible by a $231,900 award from the Utah Clean Diesel Program, which is financed by the EPA and run by the Utah Department of Environmental Quality (DEQ), a program that has been supporting clean transitions since 2008 by incentivizing the early retirement and replacement of existing older diesel trucks and equipment of diesel fleet owners.

Currently, $9 million in financing is available for Utah businesses and organizations through the program, with reimbursements of up to 45% of the costs to replace old heavy-duty vehicles with new low-emission vehicles, including charging equipment and installation for new all-electric vehicles.

“ACE Recycling & Disposal’s pioneering spirit means they are willing to take on the risks of being the first to adopt new technologies. Class-8 electric vehicles cost more than diesel, have more logistical hurdles, and require high-power chargers.” Free Reyes, Executive Vice President of Lancer Energy, said. “All those challenges aside; applying today’s leading-edge technologies allows ACE Recycling & Disposal to prepare for and build our renewable future. What an amazing thing it is to have a waste company that cleans our air.”

The motivation for the implementation of this project lies in the advantages of advanced fuels and ACE’s commitment to sustainability. Since 1980, ACE has been committed to safety, service, and sustainability in the Salt Lake Valley. When it comes to testing advanced fuels against their petroleum counterparts in terms of vehicle performance and practical business implementation, ACE Recycling & Disposal is an experienced business.

“At ACE we are committed to sustainability. Finding better ways to keep our communities clean while protecting the environment,” ACE Recycling & Disposal said.

The features and capabilities of the truck highlight the advantages that electric garbage trucks, like school buses, have over conventional vehicles that consume diesel.

Electric motors are more effective at starting and stopping than gas motors, the trucks have predictable routes and the ability to charge each night, and electric motors have fewer moving parts than their petroleum-powered counterparts, making them lower maintenance. These are the factors that make battery-powered garbage trucks ideal.

Additional benefits include becoming a stronger partner for the communities being serviced, lowering emissions, saving costs and reducing noise pollution.

In addition to being a long-time partner of Utah Clean Cities, ACE Recycling & Disposal is a leading fleet in the Beyond Zero Green Fleets Program.

The company began transitioning its fleet vehicles to compressed natural gas (CNG) in 2008 with a small CNG fleet that was funded by tax credits providing $35,000 per CNG vehicle. Since then, it has increased to running more than 50% of its fleet on CNG, with 99 heavy-duty CNG refuse haulers and three private CNG fueling facilities.

ACE Recycling & Disposal has been running on renewable natural gas (RNG) since March 2019. RNG is a fuel produced from a variety of sources, including organic waste, livestock operations, and landfills. As we no longer use fracking-extracted natural gas, using RNG further lessens our environmental impact.

“The Beyond Zero Green Fleets Program aims for 100% zero-emission at the tailpipe and has accomplished this goal with its larger legacy CNG fleet using renewable fuel sourcing. As Utah’s top award-winning refuse company, we celebrate the leadership at ACE Recycling & Disposal for rolling out the first 100% electric hauler,” Tammie Bostick, Utah Clean Cities Executive Director, said.

Two gears—one from 0 to 30 mph and the other from 30 to 65 mph—make up the drivetrain. The truck’s interior cab is standard, with the exception that the driver’s seat is on the opposite side. The truck is equipped with an air conditioner, a radio, an emergency killswitch, both an air and an electric horn, controls for all hydraulics, a joystick for the mechanical arm and a monitor for the external six cameras (one for the mechanical arm, one main rear, two for both the right and left rear and two for the sides of the vehicle).

The battery pack, which consists of 16 various modules and 2 coolant reservoirs—one for the motors and one for the batteries—has a total voltage of 642 volts. More than four times as much energy as a typical Tesla, the battery pack has an estimated 350 kWh of capacity. Wrapped in orange tubing, the high-voltage safety cables are run from these battery packs to the electric motors in the rear bed frame.

Similar to a dump truck, the truck has rear tires that can be dropped and are used to disperse weight so that it is road-legal. This type of large payload vehicle necessitates a means of shielding the roadways from the increased weight stress. The garbage bed in the back must be raised to access the two motors, which are housed underneath. Together, the two 200-hp motors produce about 800 lb-ft (1084 Nm) of torque. Additionally, it includes a stilt for accessing the motors and two axles.

The heaviest part of the truck, the garbage bed, is composed of bullet-proof AR500 steel plates. To handle varied materials and heavy loads of trash that may be abrasive or destructive from repeated usage, this garbage bed needs to be created with materials that are durable and do not erode or weather. After the trash is lifted and dumped into the bed, a hydraulic compactor in the bed compacts the waste to make room for more.

Further, the garbage bed’s back gate can be raised during unloading using hydraulic arms on the bed. A hydraulic tank and the all-important mechanical arm are also located over the bed frame along with the garbage bed. The hydraulic tank is significant as it powers all hydraulics, including lifting the bed, regulating the mechanical arm, compacting trash, and raising the back gate to empty the truck6. It also has its own drive shaft, electric motor, and hydraulic pump.

All of these cutting-edge features combine to make this a top-of-the-line electric vehicle, capable of performing alongside its petroleum and RNG counterparts.

Find out more about this Electric Garbage Truck by watching the video, via Zack Nelson @JerryRigEverything.